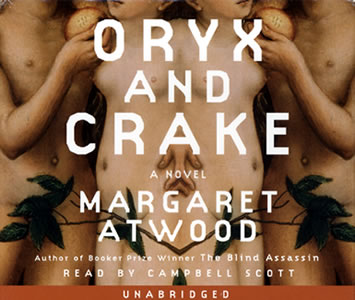 Oryx and Crake is a post-apocalyptic work by Margaret Atwood. The plot shifts back and forth between the present - one human survivor watching over a group of genetically engineered human-like people- and the recent past - during which society is rife with ethical problems that eventually lead to the annihilation of humanity. The world is ruled by corporate interests rather than a government and society is stratified physically separating, and protecting, the haves from the have-nots. The story is sharp, terrifying, painful, funny, and tragic. The tone is ambivalent toward the characters. Though the plot follows only one character, presenting only his point of view, the reader is allowed to decide if his perceptions are accurate and is not encouraged to like or dislike him or anyone else.
_____________________
I am not a person who likes surprises. I get upset if my husband tells me that he has a present for me several days before I get to find out what the present is. When I first read Good Omens, I kept thinking of how nice it would be to read the book the second time through when I can not worry about the plot and just focus on how it is written. Contrary to common sense, books cause me no less anxiety when I read them the second time. Quite the opposite. I read East of Eden many times, at least once a year, sometimes multiple times in a year, to the point where I often open the book to a particular section I like and just read those parts and then put the book back. I know the story, I have lived with the characters for about 8 years now, the Hamiltons are my friends. But each time I read it, I get tense whenever Charles attacks Adam, when Kate/Cathy starts to drink. Will Joe finally get the breaks? Will Tom handle Dessie's death? Will the ice-pack plan work? Again and again, the story does not change, but the anticipation builds. Do I really think the text will change? No, but I always really hope it will, I am always disappointed when something goes wrong, fearful when something bad is going to happen, something irrevocable, plot changing.

But I try to resist the temptation to read the wiki plot before I read a book (although I almost always do before I watch a movie). I have it on good authority that it is somehow better that way (the books, not the movie). So I try. Truth be told, not even the wiki would have prepared me. So READER BEWARE: If animal cruelty, even if only mentioned in passing, upsets you, then you may not want to read this book. If torture as a sport or kiddie porn is one of your buttons, you probably do not want to read this book.

Which is not to say that the book is about these things. But the main characters, Snowman, Crake and Oryx, meet because the former two saw (or thought they saw) the latter in a kiddie porn flick. Snowman and Crake do not seem to have an aversion to things like watching torture or animal cruelty or child pornography. I suspect that the type of person who does, knows that it is wrong, really, really wrong, and enjoys it for that reason. There seem to be no taboos, or no serious ones, in this culture. I don't know if this is a statement about the availability of this stuff on the internet or the (supposed) increasing desensitization of children toward horrible things.

These things can make me put a book down, throw it away, burn it, leave it out in the rain, shred it. For a couple of days, I even asked my husband if he could put the book where I would not accidentally start reading it again (I'm a little OCD about having text near me, I see written words and I have to read them). Eventually, the nagging feeling of an unfinished plot got to me and I decided that I had to finish it. So I did the only thing I could do, I got out the white out and erased the parts I couldn't deal with. I am hoping that eventually I will actually forget what is written underneath and when I read it again, I won't have to be so bothered.

I am not going to summarize this one because I haven't decided which parts are plot-important and which ones are Meg-important. So I am going to focus on certain elements of the book.

Genetic modification plays an important role in the plot. Animals and plants are modified to produce more food or to mimic the flavor and texture of other food, to be immune or at least resistant to viruses, and to grow organs for transplant into humans. Humanity is also experimented on to prevent at least the signs of aging and to prevent disease. Everything in the book is possible in that, while we perhaps have not achieved these things, we have the knowledge and capability to attempt them and succeed in time. These are not ansibles or warp drives. This is diamond-hard science fiction.

Oryx and Crake constantly pushes the question, "How far is too far?" Genetic engineered food is common in the western world. Plant and animal DNA is being spliced across species. Giant rabbits with green glowing eyes? Sure, I guess, if the glowing doesn't hurt them. But why would I want those eyes? Hormone induced meat animals? I can't afford to choose the alternative. Pigs growing extra organs for human transplant? Supposedly doesn't harm the pigs and afterward the pig doesn't die from loss of its heart. But that doesn't feel right. ChickiNobs? Animals (I guess you can call them that) that grow only one edible part of a chicken, such as a breast or a leg, capable of reproducing in large numbers, but without a head or feet or wings, without feathers, with only an orifice to accept nutrients, with only the parts of the brain the concern digestion, reproduction and growth, incapable of feeling pain. Is that an animal?

The book also toys with Genesis, in that the human-like people, the Crakers, live in a self-sustaining home that provides them with food and protection. They are even vegetarians. Snowman eventually leads them out of their shelter to the world at large when he fears that the electronics maintaining their home may one day cease to function. Snowman also unwittingly sets up elements of a crude religion. They live near the remnants of a destroyed technologically advanced society which they are incapable of understanding. The Crakers are simple, intentionally designed to be so simple that they will not commit the human sin of amassing knowledge. So the simple things they are told tend to take on more meaning. I need to think more about their religion and its development but I can say this for it, at least it has both a male and a female deity. No religion is complete without both.