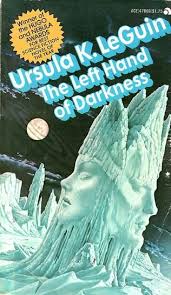 This is one of the first feminist science fiction works and my first sci-fi book to consider the nature of gender relations.

The protagonist, a member of the "bisexual" branch of humanity (in that he is male), is an alien among a race who are neuter most of the time, and thus unable to procreate during that time, and for approximately two days can turn either male or female. He is considered to be a perversion of nature since he is constantly sexually available. The period of fertility among the natives is called kemmering. Either member of a pair may assume either sex and all are capable of pregnancy. The protagonist begins by treating them all as males until. However, on a long and dangerous journey, he is confined in close quarters with a karhide undergoing kemmering. It is then that Genly Ai realizes that the karhides are not man or woman, or neither, but always both. The society has no sex/gender roles.

There is a beautiful myth of the first beings. The first born attempts to kill of its siblings but loses one when chasing after another. The youngest waits until the eldest is in kimmering. Then it returned. Each needed the either, could not survive.

The title refers to the inherent duality of karhide life. Light is the left hand of darkness. Each half does not merely oppose the other but requires it and completes it.