In ancient Greece, actors playing the god(desse)s were either lowered onto the stage by a crane or raised from beneath the stage by a lift. In either case, the god(dess) appears from outside the normal plane of work, coming from nowhere as it were. Deus ex machina. God from the machine or god from our making. Quintus Horatius Flaccus invented the term "deus ex machina" (Greek theos ek mekhanes) when admonishing poets not to use this device when concluding a play because the play or poem must be solved internally from where it develops and not from a character outside of the narrative (who would arrive via a mechanism).

Whenever I think of the term, I erroneously first think "god of machinery" as is the deity were a machine like a computer or the bureaucratic mechanism of a tyrannous government in which each member is personally responsible for small crimes that keep them alleged through shame and guilt. Sometimes I also think of dinosaurs.

Eventually I remember that the god is the machinery from without that resolves the crises, as in the modern god-of-the-lase-minute who rushes to fix life's little foibles when the faithful pray: Oh God, please get me a good parking spot. This is a god that nudges fate when the crises is imminent.


It is curious that the god-of-the-last-minute becomes the god-of-foresight when things go contrary to the wishes of the prayer. This is a god that put all the apparatus of a perfectly executed, mechanized plan from which nothing can deviate. This way, the bad things that happen must happen for a reason, not necessarily as the result of one's own sin because certain tragedies push the

plot along. So it was not that the god-of-the-last-minute failed to come through for you but that the god-of-foresight knew this was an important thing to have happened. Somehow, it never matters that the prayer was answered or not because anyone can justify the result in a manner that affirms the existence of a god who intervenes for our benefit. It always seems to me that one should probably give up praying altogether if you believe only in the god-of-foresight because what he wants is going to happen no matter what because god is always right or god who moves in mysterious ways. But if one believes in god-of-the-last-minute, then one ought to always be praying because intervention from disaster can only be averted by complaining . . . er praying.

And if that is the case, then god is pretty messed up because god will let absolutely everything terrible happen if no one acknowledges his power. While some people are so keen to affirm the existence in god that they will claim to approve of this god, I find it rather difficult to believe that they could really believe it if they think much about it. A cute baby deer dies in a forest fire because some punk kid was playing with fireworks on a dry, windy day. Since no once prayed for the deer (assuming deer can't pray), then god just lets the deer suffer and die. That's pretty messed up . . . I am so off topic. Just to wrap up, people probably shouldn't want to believe in the latter. It contradicts another notion that god is good, inerrantly good. Good gods don't let little hypothetical baby animals suffer and die for no reason. So there must be a reason. Ergo, god planned everything already (clockmaker style) so that bad things will must! lead to better things. So praying is pointless but people still want to. Why? It seems that ever since man invented an omnipotent, omnipresent, omniscient, omnibenevolent creator being, man has sought to control his deity through sacrifices, prayer, slaughter, worship.

Perhaps I should have gone into theology. There were the conversations I was hoping to have.

Anyhow, The Machine Stops, by E. M. Forster, is a story with a rather literal interpretation of my first meaning. A machine provides for all of humanity, which lives below ground in hermetic little rooms. The walls of their cells are covered in buttons which represents any need of the inhabitant. For examples, there are buttons for hot and cold baths, buttons to reveal furniture elements, buttons for food, buttons for communication. The surface of the earth is said to be covered with non-breathable air. This set up is rather like that of the Matrix movies, except that each individual is awake, though people generally dislike traveling outside of their cells and practically abhor the idea of touching one another. They are nourished and kept stimulated by means of a machine. I guess this is also kind of like those conspiracy theories from the 90's that the internet was going to prevent people from having to leave their homes because they can work, order food and groceries, and even keep up with their friends via video chat. The underground rooms, which I keep calling pods but I should really call cells, are hexagonal so that the whole city resembles a honeycomb. Although the analogy to a beehive would end there since bees are quite gregarious, like to get out, a serve a key function in its environment by touching things, that is spreading pollen from plant to plant.

Since this book was written in 1909 (beat the Matrix by 90 years!), the concept of an all encompassing mechanized device was a rather forwarding looking concept since this machine is rather like a computer system which is capable of any thousands of possible responses at the direction of the user. Unlike the Matrix, the machine does not feed of the energy of people (a rather ludicrous idea) and seems to care for humans without developing its own sentience - although it is perfectly willing to cull any undesirable elements that might rock the boat.

A young, pale, mushy man named Kuno is one of these undesirables who slipped through the system. Yearning for space, just the concept of space, not even actually space, as in room, itself. Pushing himself ever farther, he becomes really aware of his body in a yoga sort of way. He contacts his mother to express his misgivings about the machine.

His mother, Vashti . . . huh, I hadn't thought about it while I was reading but it comes to me now that Vashti was the original queen in the Book of Esther. She refused to come to him when he drunkenly orders her to do so. She was a very naughty and disobedient wife so she gets banished. Anyhow, Vashti is considered a pretty good person, well bred. She would not deign to be touched by another, even someone trying to catch her as she falls. She shared ideas but didn't originate any. Like her namesake, Vashti refuses to come when her son asks her to visit him. I don't think that her son sent as many as seven requests though. However, Vashti as a queen probably lived in the same state of pampering where her desires and needs were immediately satisfied through the apparatus of servants.

When she visits, she learns that her son may become homeless, which means he would be expelled from his pod home and most certainly die as a result. He had gone up to the surface and explored around in a field for a while. But part of the machinery, which repairs the machinery and underground city, reclaims him and returns him to his pod. Vashti leaves and lives and very proper life. She agrees firmly when ventures to the surface are made impossible by the denial of a breathing apparatus. She also publicly admits her religion with the machine as the godhead, an idea which has become the official norm.

Kuno, meanwhile is note made homeless but he is relocated much closer to his mother (previously he live on the other side of the world). One day he contacts her to tell her that the machine is going to stop. She doesn't understand the idea and tries to dismiss it but certain things became uncertain. Buttons would not always work, the music was distorted somewhat, hot showers were not hot enough and finally the beds stopped appearing. When the lights go out, panic sets in. People are finally aware that the machine is stopping. Many people die from the shock, while others seek means of suicide. Those who do not self destruct are left in silence and darkness. These few come to an enlightened consciousness about the significance of their humanity. These awareness comes just as their world crumbles away and the sky is revealed to them. However, a nice little element of hope comes through, some people who have escaped or been made homeless have banded to together and are able to survive on the surface (I'm assuming having grown accustomed to the density of regular air pressure). 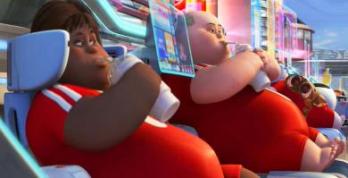 There was a lot in this story that reminded me of Wall-E. There were muscle-less people who communicated exclusively and almost constantly on videophones, even with people right next to them, arm chair people who slurp a liquid diet. The world was thought to be incapable of promoting life in its current condition which is the result of a man-made environmental disaster. A single sentience in the form of a powerful computer keeps the humans in a constant state of appeasement and docility, so dependent on the computer that they cannot conceive in a world without the nurture of the computer, would not want to live in such a world if they could even imagine one and considered the current state as progress, consciousness over corporeality.

Dependence on the machine threatens humanity because rather than help anyone, even themselves, they turn to the machine to do the care-taking. A few weeks ago, I noticed that all of the atheist blogs that I read had something to say about prayer as the laziest form of concern. Someone is sick in a hospital so someone asks everyone to pray about. Since there is no god, nothing happens. Or, according to the god-of-foresight, whatever happens is what was supposed to happen. Oh, yes, this came up on Glee and it was longer ago than I thought. Kurt is upset because everyone wants to pray for his dad. I'm upset because no one offers to let Kurt stay with them or cook a few meals or anything. They just want to pray. Kurt elects to have an acupuncturist attempt to stimulate parts of his brain. I was rather irritated at that since Kurt, who doesn't believe in god, believes is some silly pseudo-medicine. But at least he was trying to do something besides asking their imaginary friend to fix it.

There are a lot of implications in this story about the role of religion or government or technology, but I think the main message was a warning again complacency, against good-enough. It is an argument in favor of experience over the ivory tower, self-determination over instant gratification.

I wonder if this is the same machine in The Machine Rages On.