A. I. Artificial Intelligence 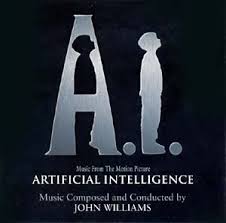 I have given much time and thought to this movie, probably more than it deserves. It is a blatant remake of the Pinocchio story. There is a conflict between humans and mechas, android humans capable of intelligent thought, emotions and physical sensation. David is the first child mecha, given to a family with an injured son who is kept in suspended animation. The child is cured, comes home, starts inevitable trouble, and David is released in the wild to fend for himself. A mecha prostitute, Gigolo Joe, helps David escape danger and find the blue fairy, which is just a statue. David meets his maker, is upset that he is not unique, and attempts to commit suicide. He spends hundreds of years trapped in a submersible craft until rescued by advanced mechas. Humans no longer exist. Mechas are incredibly advanced, communicate through touch, and look like anorexic aliens. They give David a day that he can spend with his recreated mother. At the end, he goes to sleep, or shuts himself down.

The move was started by Kubrick and completed by Spielberg, an unexpected progeny if ever there was one. Spielberg has claimed that some of the darker elements are his and I rather believe that because they were not altogether horrifying and dark. Unregistered, damaged and obsolete mechas are collected for entertainment. Humans who resent the mechas eclipse of humanity create a circus in which mechas are tortured. The so called Flesh Fair looked very much like a monster truck rally. It had all the elements of the grotesque and gaudiness for which America is well known. Except, when you step back, it is hardly scary or disturbing. The machines are incapable of pleading for their lives and capable of shutting off their physical sensations.

The ending was trite and grating. James Berardinelli, a film critic, referred to it as "force-fed catharsis." I can think of not better description. The super-robots can clone a human for a single day. What? They can read minds, are obsessed with the extinct humans, too. It just doesn't work. Supposedly this was Kubrik's idea but I feel it is a cheap conclusion, unlike Kubrik's other dark films.

If I were to remake this movie, I would make Gigalo Joe the focus. He overcomes some of this programming, he sticks by David, helps him, risk himself all in the hope that David is capable of bridging the gap between robot to humanity.

I suppose my biggest problem was how annoying and pathetic David seemed to be. He is obsessed with his mother in a nearly Oedipal way. He is whiny, incapable of socializing with other kids, incapable of doing anything really. He is almost like an infant in an 11 year olds body. His creators toy with him, his mother abandons him. It just amounts to so much nonsense.