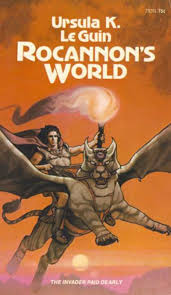 Le Guin's first novel found its place among the Hainish Cycle, the second book according to plot chronology. As with all Le Guin's novels in this cycle, the catalyst is an alien travelling to another world as part of a fact-finding mission.

The planet, later named after Rocannon, has three sentient species. One group which is very short and has split into two groups. Think Tolkein's dwarves and hobbits essentially. One group lives underground, is darker and hairier, where they pursue technology and wealth. They are weapon smiths. The other are light and happy folk who live in meadows and laugh a great deal. Both groups maintain an ability to speak through telepathy. There are also men, superficially divided by race into lords and servants, at least on the northern continent. There are fewer distinctions in the southern continents. Finally, there are also winged people, tall, slim and pale. They are more or less vampires with black wings who survive by sucking the blood out of other mammals. There may be one more species who live solitary lives in caves. Little is known about them.

The prologue follows a young woman, indigenous to the planet, who seeks to reclaim her family's heirloom, a golden necklace with a saphire gem, in order to bring honor and wealth to her husband. To do so, she travels to her childhood home, eventually travelling through the underground caves of the darker little people and their pre-industrial society. To retrieve her necklace, she must travel on the longest night of her life, not realizing that she will travel so quickly that time will pass much slower for her than for the people on her planet. When she returns with the heirloom, she finds her husband dead and her daughter now a grown woman.

Obviously, this reeks of Rip Van Wrinkle. I think this is to set you in the mindset of older stories, myths and legends. The plot proper follows the story of Rocannon, who becomes the stuff of legends. His story is much like Dune, in that he repeatedly finds himself fulfilling a legend, of which he was ignorant. After his ship is destroyed, he journeys accross the known world from the north to the south continent, facing danger and mythical beasts only hinted at by myths. Through his journey and his travails, he gains insight into the culture and history of the planet which had so long alluded him. He also feels his identity change to match the legend.

His goal is a small fleet of enemy ships. Aboard these, he anticipates finding an ansible, a device that will allow him to communicate anywhere in the universe instantly. With the proper coordinates, of course. To infiltrate their base, he must gain a gift from the Ancient Ones, the fourth species of unknown heritage. However, the Ancient One demands a sacrifice from Rocannon, the most important thing to him. He confesses that he does not know what the thing is but he will give it. His sacrifice ends up his friend Mogien, one of the Lords who had befriended Rocannon and aided his journey. In return, Rocannon gains the ability to hear the thoughts of his enemies. Though useful, listening to their thoughts is a great risk because their minds will sense his presence.

This gift is spread to members of the Hainish League, though without the same terrible price.