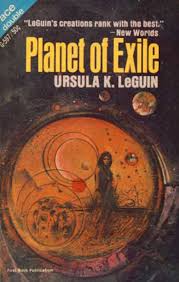 Werel is a planet with a very long orbit around it's sun. In comparison with Earth, one year on Werel is approximately the same number of days as 60 Earth years. The seasons are likewise elongated and a person may live his or her entire life without seeing the same season twice. Similarly, its moon takes 400 days to complete its cycle of phases. As a result, age is kept by moonphases rather than solar years.

A small colony of aliens, sent from the Hainish League of All Worlds to establish contact with the indigenous species. However, this group loses contact with the rest of the league, becoming exiled on Werel. Initially, there are wars and conflicts with the natives. The aliens, called Alterrans, establish small cities. The novel focuses on one city, perhaps the only surviving city of Alterrans. Despite past conflicts, the Alterrans live in relative isolation from the indigenous inhabitants.

The other grouped, because there are always at least two factions if the Hainish are involved, are natives who struggle through their lives in a primitive, semi-nomadic society. These people form family units and larger clans. The head of the family is the head of each household, having several wives and numerous offspring. A separate group of "barbarians" are completely nomadic, travelling far north in the summer and south again in the winter. Though this migration often includes some marauding and pillaging, there is a greater threat this year as the barbarians have all banded together with the intent of invading all of the winter cities of the semi-nomads.

The semi-nomads and the Alterrans agree to band together to fight off the coming invasion but a love affair between its members causes humiliation to one side and physical assault on the other. The remnants of the semi-nomads seek sanctuary in the Alterran city after their own homes are destroyed. The Alterran city comes under attack. It is during this attack that an important discovery is made.

For several generations, the Alterrans had decreasing offspring due to miscarriages and early deaths. The cause was unknown but many suspected that the planet was rejecting them as a species as happens occasionally with organ receivers. However, the injured during the many battles quickly become infected. Initially the alterran doctors are baffled by the symptoms. The original group, over 10 Weral years ago, suffered no illnesses or infections because the planet had not evolved any that would affect their alien bodies. During the ten years, the alterrans had adapted to Weral and Weral's life to the alterrans. The bacterial infections on the alterrans suggested that perhaps now they could interbreed with the indigenous population, which had not previously been the case.

The ability to interbreed is one of the more confounding definitions of "species". You might think you know what a species is but it is difficult to truly define one species from another because evolution just does not work along clear cut lines, on one side you are a giraffe and the other you are a race horse. The alterrans and werals came from the same species but were separated for thousands of years by thousands of light years. Neither group was certain of the humanity of the other, but they were forced to come together by circumstances and biology.