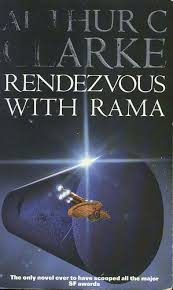 Against expectations, the aliens do not appear. Rather, Rama is a passing world, briefly coming to life in a shocking display of evolution and animation only to recycle itself as it sling-shots around the sun in disregard for the animal life it has confounded in its brief journey through the solar system. Any and all things understood about Rama must come from human reason and imagination. There is no host population to translate and explain.

Rama, a world in an enormous pill. It is a medicinal dose of discovery. Stories of conquistadors, missions, colonization, etc, that make us all slightly ill with guilt - or at least they make me feel that way. Why? Certainly not because I would conduct negotiations at the end of a gun. I have the privilege of living in 2010 in a fairly egalitarian society (at least politically on paper) and in the great wide world known as the internet*. The exotic has become psychologically domesticated and I have little fear of run ins with the unknown (and even less opportunity to have such run ins). Rendezvous with Rama offers a fairy-tale type of exploration. Hostility is denied, fears are faced, and extraordinary astronauts repress their biological reactions in the name of diplomacy. It is with great sadness and relief that these star sailors flee without having met one of the true Ramans. There is no culture clash, no war culture coming across a peace culture (you can decide for yourself which culture either of the teams would be on). I did not draw a connection to the Age of Exploration on my own. The spaceship is named the Endeavor after one of Captain Cook's ships. The captain often ponders Cook and compares his successes and failure to Cook, not only as an explorer and captain but also as a human and a husband.

There are indeed some forms of life, the biots, biological robots. They are simple, utilitarian, undeniably organic but not alive as we understand the word. In high school, on the first day of biology, we were asked to define life. What an extraordinary complicated task. What lept to my mind was the inevitability of death, which is no more easy to explain in a satisfying way. I could say the inability to move, permanent lack of consciousness, etc. But these are merely negations of life. So what does alive mean? We agreed that reproduction, conversion of material into energy (metabolism), and growth were necessary. Sufficient? Not quite. A robot-building robot might fit that description. Self-sustaining seemed important, although like many other elements is suggests that certain humans in certain conditions are not truly alive. Cells! now there is an element I can get behind. Some organization of a cell or cells-microscopic bacterium, enormous ostrich egg, and the beautiful gestalt of multi-celled organisms. Dr. Kephart kindly added some of the remaining elements which had been either too uncertain or too unclear in my mind (and probably others'): evolution, the possibility to change from generation to generation; stimulus response, which can be part of growth but also exhibited in movement. So, there you have it, life itself. Solitary, poor, nasty, brutish and short.

How do the biots rank? Reproduction-check. The biots had available blueprints for their makeup and were either spawned or built as Rama neared Sol. Metabolism- null. Biots lacked a means of ingesting food or a digestive system. I don't think the shifting of electrons through a power chord count as metabolism since the energy is already converted. Growth - null. Self-sufficient - null. Cells-check. Their skeletal system was built in a honeycomb pattern of cells, which reminded me a great deal of that awesome cat with the million-dollar-man style hind legs. But the biot's cells were organic. Evolution-difficult to tell but I would imagine null. Stimulus response, check. I found this an inconclusive and dissatisfying analysis. But at least these biots are only science fiction (at the moment) so the ethical ramifications of their possible life can be delayed, probably through my lifetime and yours.

These biots, while possessing mobility and some intelligence, ignore the astronauts. Since the Ramans fail to appear, the humans have only Rama itself and themselves to explore. While this may seem dull and

uneventful, I can feel a lingering tidal tug that will cause me to return again and again to some detail from the story. Each character is well developed and believable. Those in charge have attributes we wish to ascribe to ourselves, even humility. And because I can relate, I find myself questioning what I would think, how I would act, what I would do. Rama is much like the early Myst series computer games. They provided a world to explore without the threat of inhabitants.

In case you are wondering, and like any good human you are always wondering, Rama is one of Vishnu's avatars. He is known as the Lord of Self Control and the Lord of Virtue. His life is a struggle to maintain perfect dharma, by doing what is appropriate and right even in difficult trials.

*Spellcheck insists that the internet must be capitalized but I disagree.