I've been sick for a couple of days now. I can never figure out if it is better to just get sick, get over, and acquire a new immunity or to become a germaphobe, keeping a steady stream of purell and deplete my immune system. Anyhow, since I am sick, I let myself be lazy today, with intermittent fever.

Before my nap, I read a few chapters of Do Androids Dream of Electric Sheep? I watched the 1984 Dune movie. I was impressed but I want to digest it before I write about it. Following that was 1.5 episodes of Star Trek: The Next Generation, Dr. Who, Top Gear and wrapped up the night with Alex telling me about the advances in science in the recent issue of the Economist. Altogether a good day for science and science fiction.

The full Star Trek episode was Conundrum. All members of the Enterprise have their memories wiped clean and become pure subconscious. I was extremely alarmed by the supposed first office MacDuff, who I could not remember for the life of me. He was an alien who had infiltrated the starship to win a personal war - what a relief! I found it pleasing to watch Lt. Commander Worf being captain and later watching Piccard's ethics overcome his fear.

Dr. Who remains a mystery for me. It just does not grip me. There is all this magic, these messes that are never cleaned up. It is a lot like Quantum Leap (or I suppose it is really the other way around) but it is less tidy and full of things that could not happen. To be specific, I watched the episode with the intelligent, mobile plastic. I assume it was the start of a series since the doctor picked up a new chic to play with, unless he does this every episode. If I were to classify Dr. Who within a sub-genre, I would stick it in limp sci-fi. It is sci-fi the way an illusionist is a magician. What we call magicians now a day is actuall 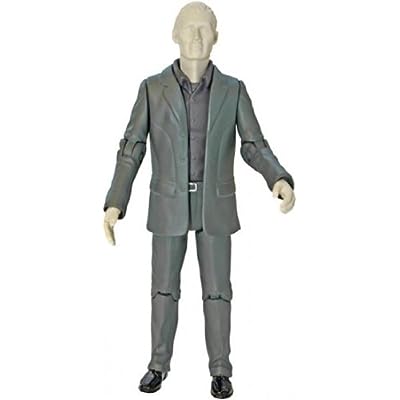 y an illusionist, someone who pretends to be a magician. You can only call him a magician if you really think he pulls a rabbit out of thin air. Hint: he doesn't. And the chemical structure of plastics can neither think nor bend through volition. Can I have just a tiny bit of believability? I'll grant the altruistic alien super hero with a special phone box, but an intelligent plastic? Come on.

Geez, I just found out you can actually buy little action figures from just about any episode. So you can buy these clever little plastic figures and play out your own bizarre bad-science stories where everyone in the universe has north English accents? Or did I misunderstand and these are collectors items? Which is worse?

Email ThisBlogThis!Share to TwitterShare to FacebookShare to Pinterest
Labels: Dr. Who, Star Trek: The Next Generation