I have heard from plenty of people that they love this movie and that it is the best Star Trek film. I just cannot agree. I thought it was terrible.

I know this is a little uber-geek but I was put off immediately when I realized that James Kirk was not being born in Iowa and that his father died. I have accepted the parallel universe plot device but who is Jim Kirk without being in is father's shadow? If there was any chance that I would like the movie, it was blown to pieces when young Kirk steals a classic car, answers his Nokia phone, blasts the Beastie Boys, is defiant and rude to his guardian, and then throws the car over a cliff. What? So Kirk is a punk, there is still petrol and in 2233 we are still listening to the Beastie Boys?

A lot of people also said that they loved the new Kirk. The thing is that I love Shatner. I loved him as captain Kirk when I was little, still do, and I love the person he is now. I know that Kirk has a reputation for being a lady's man but he consistantly refused romantic entanglements because he put the needs of his crew before his own needs and desires. There was always a tragic element with him, a heroic loneliness. He was also a wise and intelligent man. His refusals to obey Starfleet rules were always in the best interest of those at risk, not just his own petulant flaunting of his ego.

I also liked the emotional depth and ethical dilemma that were mainstays of the show. This movie offered no challenge to modern society. The original frequently battled sexism, racism, class hierarchies, politics, economics, warfare, torture, etc. There were just cheap ploys of baddies and goodies, no attempt to fix destruction of the Romulan homeland, and explosions. The new movie was just a bunch of smart-ass brats instead of mature, responsible and compromised adults.

I didn't buy Spock's classic struggle of Vulcan vs human. I felt like McCoy was absurdly stereotyped. And well, I just plane hate Scotty. Harold is just no match for Tekai as Sulu.

For a trekkie, it was funny that Kirk didn't know Uhura's name (she didn't have a first name in the original series). I enjoyed the inclusion of Capt. Pike. I found the women's uniforms tragically outdated and insulting. Why didn't the Romulans look like Romulans anyway? 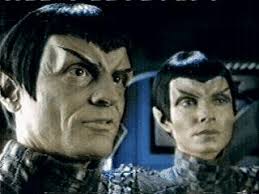 Did Roberto Orci and Alex Kurtzman ever watch the show? Any of them? I guess I really shouldn't expect much from the people who wrote the Transformers movie. I beg you "writers", please stop destroying my childhood.

For those of you who like the original series, the original Captain Kirk, or just love the Shatner, here is some gratuitous classic Kirk.