I am no longer a comic con n00b or virgin or whatever. They say you always remember your first time . . . but I've got pictures just in case.

The line to get in was really long - at least for those of us who bought our tickets online ahead of time. I don't really mind though. Small price to pay to be sure we could get in. Actually, I somehow only bought one ticket, not two, so we had to buy Alex's online last night. We couldn't pull that stunt in San Diego. Being line also gave us a chance to check out costumes without the overwhelming crowd inside. Unfortunately, I did not get a picture of some of them, including the best classic Joker and Harleyquin. There was also a great Egghead who did an eggs-ellent Vincent Price during the Q&A with Batman and Robin. Sorry. But I did get some other goodies.


Here are a nice group of Batman villains. Penguin, Scarecrow (complete with noose), Hush?, The Riddler, Cat Woman and . . . Dr Who? Is this a villain i just can't recognize? 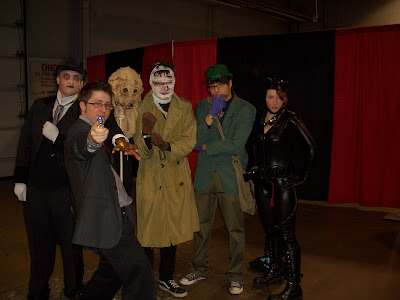 Jade (one of the Green Lanterns) and Wonder Woman. 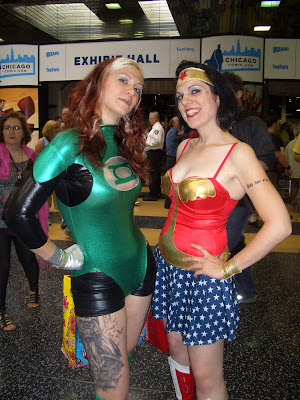 These kids are just plain awesome. Zuko (as Fire nation), Zuko (reformed), Suki (complete with her fans!), Katara, Fire Lord Ozai, Aang (his arrow even looks like it is glowing!), and my hero Toph! You can tell by their poses that they really identify with the characters and know them well. One of their chaperons was dressed like Iroh (or Boomi, his hair was kind of crazy). 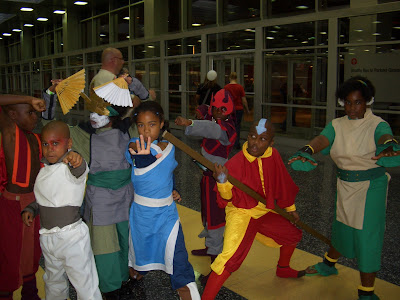 One of the sexiest catwomans (catwomen?). She knew what she was doing with the whip! 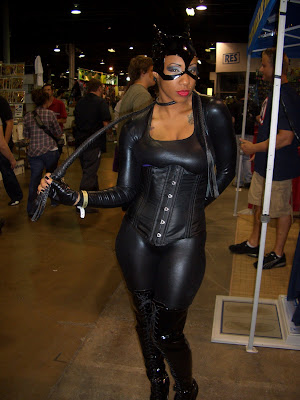 Leeloo! I saw her while we in line and spent a good part of the day trying to chase her down again, which is really silly since she had bright orange hair! She is even holding up her multi-pass. 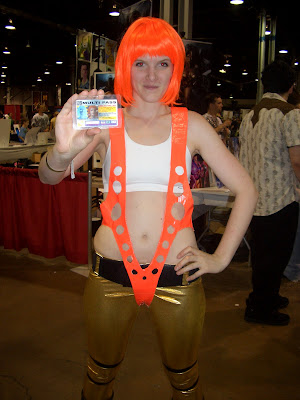 This is Paul, creator and controller of the R2 unit. It was fun to watch other people try to figure out how the R2D2 was controlled, despite his enormous remote control. The R2 was fully functional-it's head spun, he could move in any direction, the lights turned on and off, his control panels opened and closed, he chirped and beeped - all via the remote. Paul says that it took him about 3 years to build the R2. 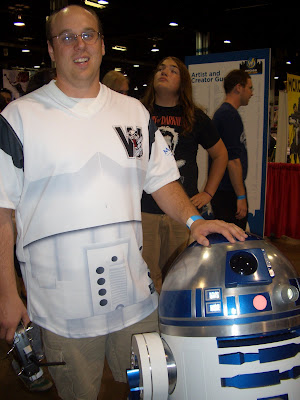 A fourth incarnation Dr. Who. I'm not into the whole Dr. Who thing, but this guy obviously nailed the costume. I could tell who he was from the back. He also had his baggy of Jelly Babies to pose with. 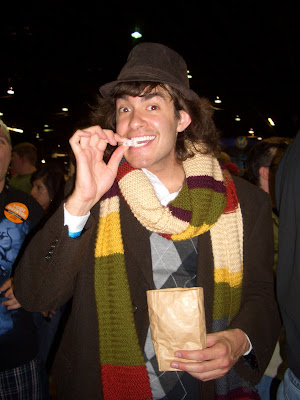 Okay, I have no idea who these vampires are but they are reclaiming vampires for the power of awesome. It's a shame that you can't tell how creepy their eyes are. They each had different unnatural contact colors-gold, white and teal. Their costumes were high quality. I can imagine that the middle woman could easily go to battle in hers. They were very much in keeping with the Society of Creative Anachronisms . . . just, you know, vampires, too. EDIT: A friend of mine says that they look as if they may be costumes from Underworld. It would make a lot of sense but part of me wants to believe that these three are just being original. 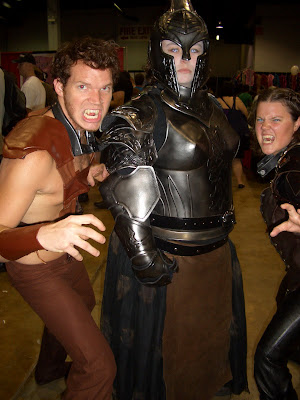 Clyde (Clyde who? Someone help me), Spiderman, The Flash and the robot that I was actually trying to get a picture of. I don't know if he is from something. I kind of hope he isn't. There isn't too much originality in costumes at conventions. 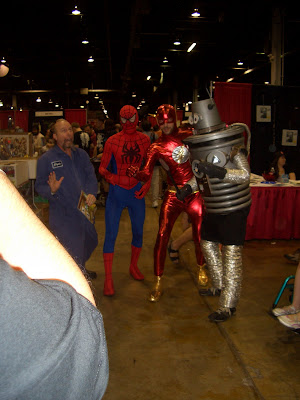 Ghost Busters! I really should have taken a picture from the back since their packs were amazing but I wanted to get a picture of the creators instead. 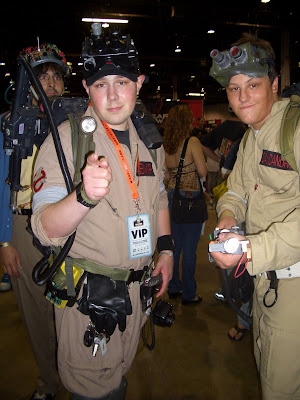 I got this picture just for my friend Tawny. Tawny made me watch a lot of Xena when we were growing up. How could I pass up a picture with this awesome babe in her home made, all leather sexy warrior princess gear? 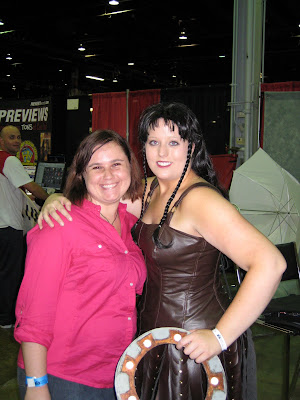 This is the DeLorean. People who paid to have their pictures taken inside of it also got to hold a hover board. If we hadn't already spent so much money yesterday, I think we would have gone for it. All donations went to fund Parkinsons research. 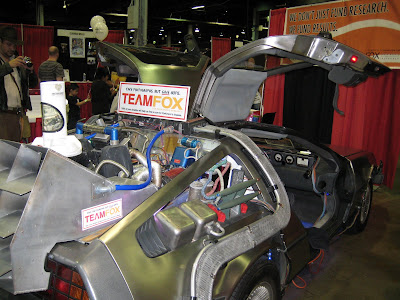 I have been assimilated into the Borg! This was one of my favorite costumes of the entire. He walked around stiffly, just like a Borg should . . . or just like a man in a wet suit covered in a massive and constraining costume. 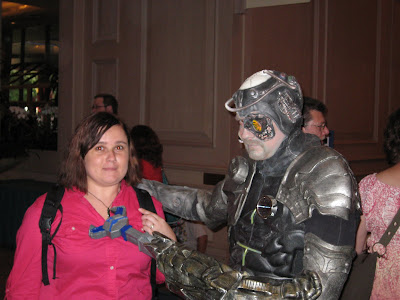 And now, what you have all been waiting for: Alex, Meg and the Shatner. I was a little saddened by the assembly-line way the pictures were taken, especially after our picture with Micky (see below) but I will treasure this picture forever. We didn't get is signed since a signature cost $75 and we had already spend $100 just to get the picture. 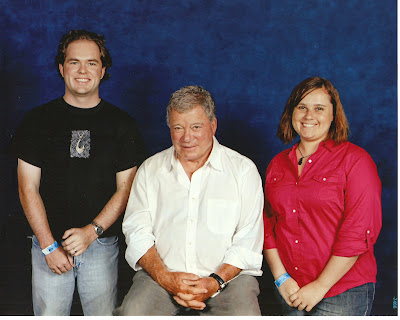 What is Micky Dolanz doing at the Wizard World Comic Con? I have no idea. But I am so glad he was there. I lurve The Monkees. I remember staying up late several days in a row to catch blocks of episodes on Nick at Night. I even have a few of their records, a gift from my grandparent's friend Lacey. In person, Micky is just as sweet as you could possibly hope. I was practically shaking with . . . I don't have a word, anticipation or excitement or thrill. And he was just so nice. I bet he is the sort of person that, even if he wasn't Micky from the Monkees, you would love him the second you met him. I bet you didn't know that his name is really George. His middle name is Michael and he didn't legally change his name until 1980. In case you can't tell from the picture, he is one snazzy dresser. 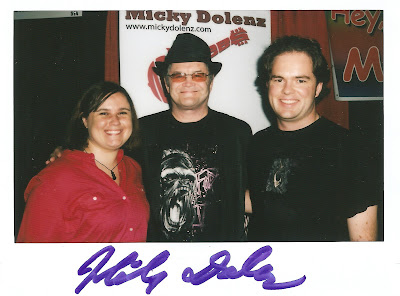 So, those are all of my pictures from Saturday. Alex's coworker John was also there on Friday and will be sharing his pictures with us. I will post as soon as I get them, which will probably be on Monday.