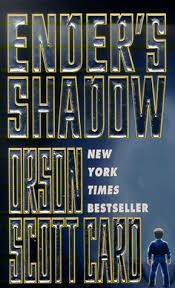 Ender's Shadow covers roughly the same time span as Ender's Game, but from the perspective of the character Bean rather than Ender. Bean is an experiment in DNA tampering to create a super human. While he is brilliant, his growth pattern has been altered. He grows slower than most children, but will continue to grow until he becomes a giant and dies prematurely, most likely from heart failure. Bean was created alongside 22 other children who were destroyed when the government caught on to the experiment. Bean was the only child, infant really, to escape by hiding in a toilet tank. He was saved but ended up on the mean streets of Rotterdam.

He is homeless and nearly dead from starvation when he convinces a crew, a small gang of homeless children, to try to get a bully to protect them. The plan temporarily works. Achilles (pronounced in the French as ah-SHEEL) makes the crew into a family, an angle which he manipulates to gain greater and more consistent access to food for himself and his family. Card again focuses on the inhuman cruelty that children can inflict on one another. Achilles eventually kills one of the kids, Poke. Poke had grudgingly allowed Bean into her crew and offered him food when he was close to his last breath. Bean blamed himself for Poke's death and his haunted by the memory.

Eventually, Bean gets to Battle School and the gist of the plot follows the history of Ender's Game. Except, if you thought Ender was a snotty know-it-all, you will hate Bean. Bean is occasionally wrong, especially when it comes to certain social interactions. Bean's role is much more important in this version of the story. He is powerful but always works behind the scenes, sometimes even literally in the shadows. This book is kind of obtuse, like an exclamation mark instead of an ellipsis. There is just no subtext. The religious elements are much more dramatic, thanks in part to the helpful nun Sister Carlotta. However, it is difficult to tell if Card is intentionally ambiguous or just incapable of making a coherent theological statement.

I did enjoy reading the book, up until the end at least. The happy ending, Bean reunited with his biological parents and his unaltered twin brother, who just happened to be in Bean's launch groups . . . it's too much. That kind of ending might give me diabetes. And the problem of his uncontrollably, fatal growth is somehow forgotten. The end to the bugger war is likewise emotionally dead. Ender's realization, his horror, his guilt, his grief, this is what made the original worth reading. But Bean knows all along and Bean does not seem to feel the consequences of wiping out an entire sentient species. He just has the happy ending. It couldn't be more cliche if he ended up married to Petra.


*Added on August 12th*
I would like amend my final conclusion. The family-reunion end, that was cheap. But I did not give proper credit to Bean's response to the final battle. In Ender's Game, Ender felt the weight of his xenocide, the loss of a species which had connected to him personally. He felt sacrifice of the human pilots but it did not linger in his regrets. Because I was comparing Ender's Shadow to Ender's Game, Bean to Ender, I let myself forget Bean's response to the pilot's death.

Bean was aware, almost the entire time, that he was not staging mock battles for training, that real people died when he lost a ship. Bean realized that the pilots were willingly sacrificing themselves, throwing their lives away in the hope that one of them would survive long enough to save humanity.

I feel that religious people are often terrible at putting religious depth into fiction. Since I am an academic studying religion, I get a bored by pulp religion. You know, the kind of stuff that shows up the history channel or in hospital gift shop books. I've got nothing against religion or spirituality (although I think faith is criminal) but I don't like anything cheap. The great thing about religion is its complexity, its ambiguities. People who think religion offers easy answers might as well be living in Aldous Huxley's futuristic dystopia.

Just before the pilots plummeted to death, Bean sent a private message to them, paraphrasing 2 Samuel 18:33. And the king was much moved, and went up to the chamber over the gate, and wept: and as he went, thus he said, "O my son Absalom, my son, my son Absalom! would God I had died for thee, O Absalom, my son, my son!" Absalom, David's son, started a rebellion. This epitaph is what David cried when he heard his rebellious son had died. I know that the import of the message is "would god I had died for thee" but I wonder what else can be built from it.

Absalom had also killed his brother, Amnon, who raped their sister Tamar. Amnon had been heir apparent until Absalom avenged his sister. Absalom hid for three years in his grandfather's kingdom before his father took him back. Absalom began his rebellion by building support for himself, promising justice and offering humility. Absalom was captured in a humiliating fashion. His handsome head and flowing hair were caught in a forked tree while his mule ran off without him. He was trapped until Joab put three spears through him, against Daddy King David's wishes.

He did the right thing, he was exiled, he was a murderer, he rebelled, he promised justice, he was killed against the king's commands, he was grieved. All these things were true of the pilots as well. King David had a curious relationship with his children. He loved them in their terrible flaws. His mourning frightened others because it went against the mores and customs of the time. Things to contemplate.