My first sci-fi look is inspired by Uhura from the original Star Trek. I picked her because she was one of the first women to be sexy, intelligent and capable. She is beautiful but she is also respected. She was also one of the first African-American women on television to play a strong role rather than a subservient minor character. Uhura and Kirk shared one of the first interracial kisses on television, and the very first romantic interracial kiss. Her character broke enormous boundaries in social expectations. She has been a role model for countless people, including me.

This picture is not the best angle. I have a sharply angled bob so there is little hair on the back of my head, making it difficult to make a large bouffant. Since I wanted to show off the hair, I dipped my head to show off my hair, sacrificing some of the work I did on my eyes. 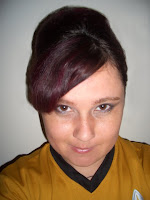 How To:
One of most iconic parts of Uhura's style was her hair. She wore her hair high on her head and never below her shoulders. I picked a bouffant to give myself a big hair, 60's look. You can fake the look by purchasing an instant beehive device that looks like a brick-sized sponge. Just place, come hair over, and pin. But I don't have one of those so I did it the old fashioned way-I divided my hair and back-combed. If you want to create the look, I recommend watching a few youtube videos first. I found this video to be the most useful for me.

She often wore styled, blunt bangs (fringe). I picked a bouffant to replicate her high hair-do. I tried to style my bangs like hers but I burned my forehead with my curling iron so I had to side sweep and cover the burn.

Uhura's make-up focused on her beautiful eyes. She often wore a cat's eye style that highlighted her large eyes and strong cheek bones. To make the cat's eye look, place your finger on the outside of your eye where the lids meet. Then pull your eyelids toward your temple. Using a black eyeliner, trace just above your lash line on your top lid. continue drawing the line straight out. On the bottom lid, start in the middle of your lid and draw toward your temple until that line meets the other. Do not angle upward; the line will shift when you let go of your eye. Repeat on your other eye. Since Uhura's skin is darker than mine, she can underline her eyes with a lighter color without making her eyes seem small. However, to get the look, I added a white line under my eyelids. Though it is not visible in this picture, I used a light gold on my eyelids.

There rest of Uhura's make-up is neutral to draw attention to the eyes. She often wore light, neutral lipstick. I picked a light pink stain and then covered it with a peach gloss. I used a medium shade of blush with a steep angle from my temples to the bottom of my cheekbones to give the appearance of higher cheekbones. To heighten the effect, I used a shade lighter than my skin color to draw a V on each cheek. If you want a more complete look, consider adding large earrings and a short mod dress with long sleeves.

There are some features I cannot replicate. Unlike my flat eyebrows, Nichelle Nichols has high brows which have a high curve. She also has beautiful drooping eyelids have the same sexy-sleepy appeal as Marilyn Monroe's.